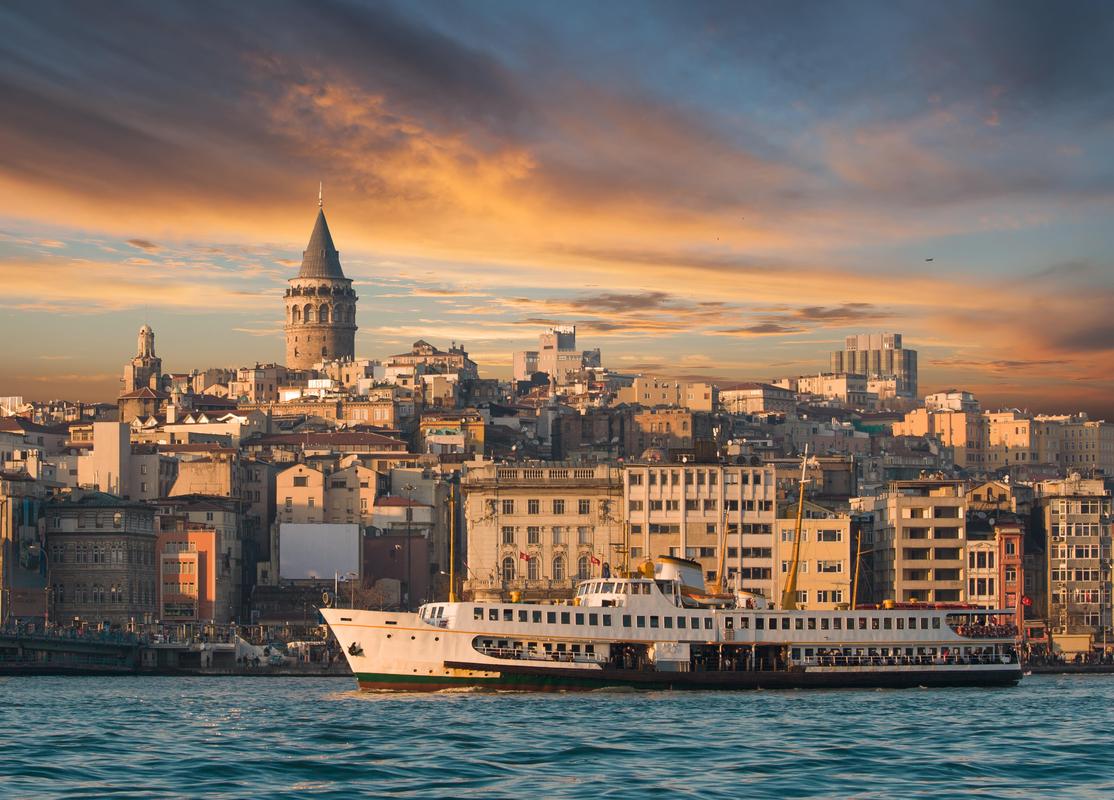 As a home to many civilizations for a thousand years, Istanbul has taken the stage again as an international trade and business center with its diverse, dynamic and fast growing economy offering many lucrative opportunities for the multinational’s.

As Turkish economy grows with historic records, Istanbul acts as the engine of growth, having US$25 k GDP per capita income to which correspondes more than two times of countries’ average. Compared to 2001 level, GDP per capita in Istanbul has increased more than fivefold. The foreign trade volume is approx. US$193 billion, where 71 k companies are dealing with international trade in Istanbul. 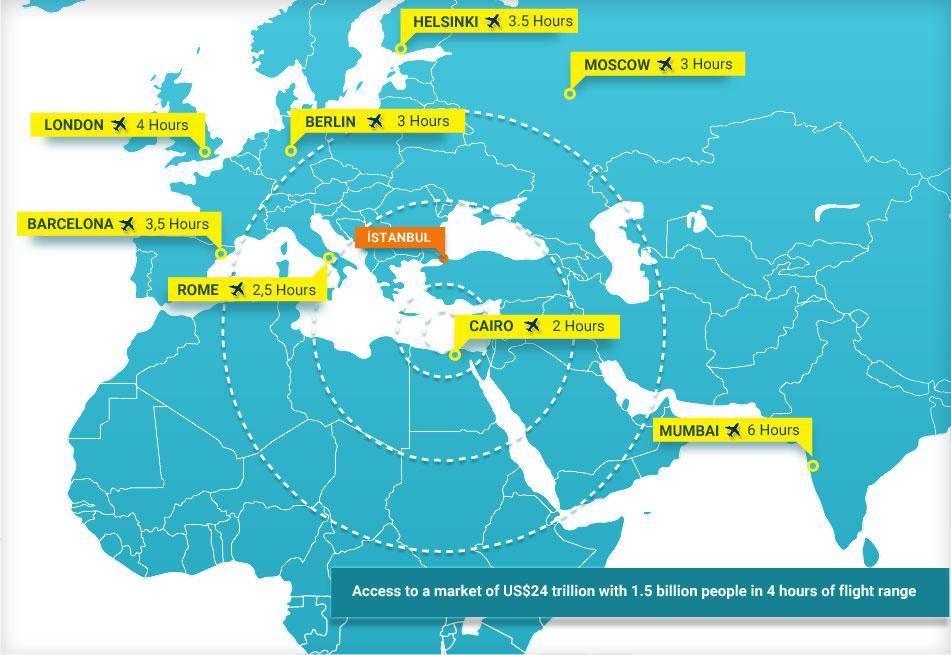 Voted as Europe’s Best Airline at the Skytrax Passenger Choice Awards for the last five years consecutively and 7th at the 2016 World Airline Awards, Turkish Airlines is the #1 in the World flying to the most countries worldwide with 292 destinations in 116 countries.

As the turn around port for many cruise ships, Istanbul is mostly reached from the Aegean Sea. Besides, Karaköy Sea Port is also used as a stopping point for a number of international ferries. The Bosphorus is an important passageway for international cargo ships and tankers, and a crucial stopping place for mediterranean cruises.

Istanbul has two railway stations: Haydarpaşa on the Asian side and Sirkeci on the European side. The city can be reached from Belgrade (via Balkan Express), Bucharest (via Bosphorus Express), Budapest (via TransBalkan Express), Kischinev (via Prietenia Express), and Munich (via Istanbul Express).

Skilled and Dynamic Labor Force Shall Make You Globally Competitive

Along with its huge potential in human resources, Istanbul is a city where you can achieve your business goals with utmost accuracy.

Istanbul has gone through an outstanding transformation and made extraordinary headway in many fields with the help of its mega infrastructure projects. These giant projects represent the culmination of the substantial leap taken in the last decade towards a well-developed and prosperous city that seeks to compete at global stage.

The Eurasia Tunnel Project (Istanbul Strait Road Crossing Project), whose foundations were cast in 2011, connect the Asian and European sides via a highway tunnel going underneath the seabed.The Tunnel, which is valued approx.US$1.5 billion, serves the Kazlıçeşme-Göztepe route where vehicle traffic is most intense in Istanbul and will covers a total of 14.6 kilometers. Tunnel pass and road improvement-expansion work causes holistic relief on vehicle traffic. Not only the travel duration on the route with its highly intensive Istanbul traffic declines from 100 minutes to 15 minutes, but also the privilege of safe and comfortable travel is experienced. It also contributes to the reduction of environmental and noise pollution in the city. 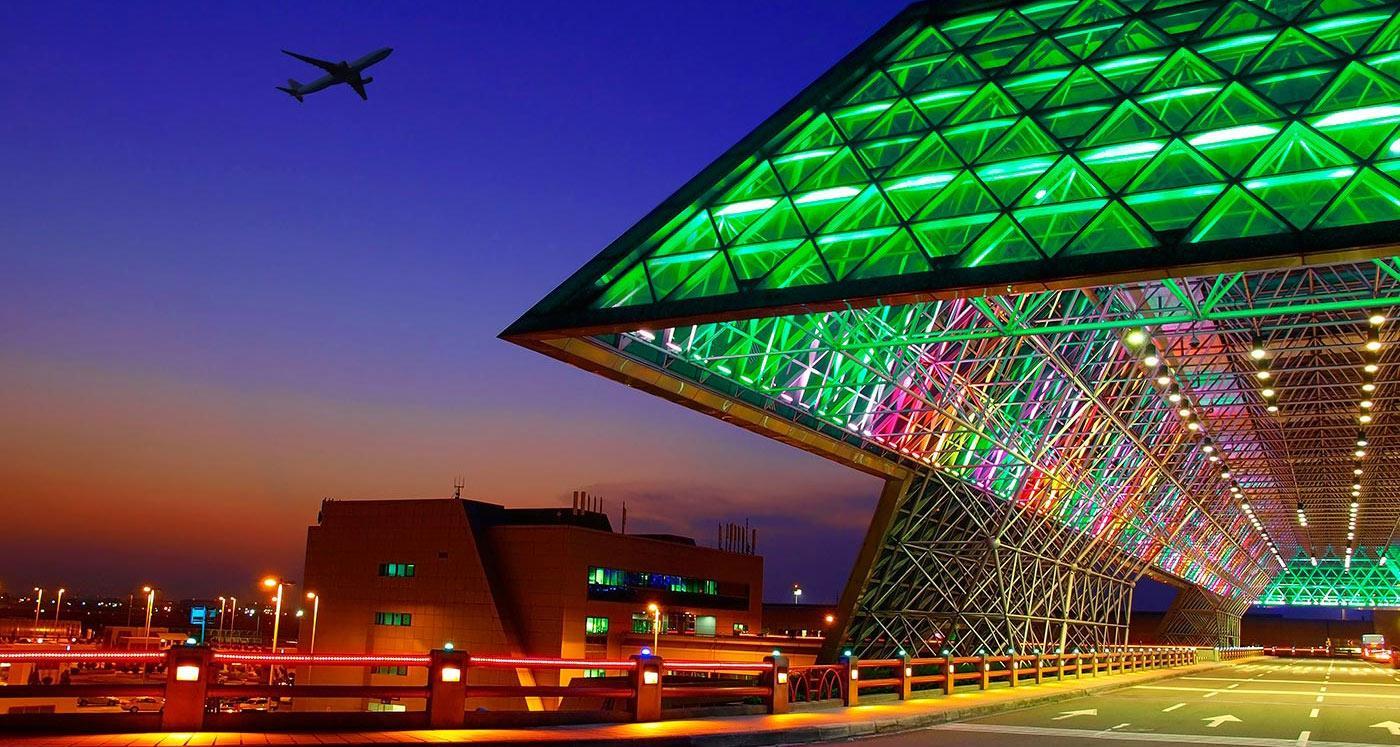 Istanbul New Airport, which consists of a total of 6 runways, 16 taxiways, 4 terminals connected with a railway system, 181 aircraft passenger bridges at all terminals, 6.5 million m2 apron with 271 aircraft parking capacity, 3 maintenance buildings, 8 air traffic control towers, a car park with a capacity of about 70,000 vehicles, a clinic, a fire department, hotels, a convention center, and recycling and waste disposal plants, is now being constructed at the Istanbul’s Northwestern side, on an area of 7,659 hectares. Following the finalization of the project, it will provide a capacity of 150 million passengers; the world’s largest in terms of the passenger volume. The airport, which is planned to add 100,000 more jobs to the market, is expected to be completed in 2018 and shall be the largest airport in Europe.

Yavuz Sultan Selim Bridge is a suspension bridge under construction located at the northern end of the Bosphorus, north of the other two bridges, in Istanbul. The bridge is part of the projected 260 km long “Northern Marmara Motorway”, which will bypass urban areas of Istanbul in the north connecting Silivri district in the west and Hendek area in the east. When completed in 2015, Yavuz Sultan Selim Bridge, whose budgeted cost of construction is approx. US$2.5 billion, will be the longest combined motorway/railway bridge of the world and the world’s 9th longest suspension bridge.

A three-level sub-sea tunnel project has been approved by the Istanbul Metropolitan Municipality; and was announced in 2015. The estimated US$3.5 billion mega-project, with a three-level, sub-sea tunnel under Istanbul’s Bosphorus Strait which will connect the city’s two sides with one railway and two highways, is expected to cut travel times to 14 minutes. Bosphorus Bridge, Fatih Sultan Mehmet Bridge and Yavuz Sultan Selim Bridge will be connected to each other once the tunnel is completed. The three-level tunnel is an environmentally-friendly project. According to calculations, oil consumption will decrease by roughly 54 million liters due to the project and carbon emissions will decrease by 175 tons per year. The project will not damage the city’s silhouette either.

Mercer’s Cost of Living Survey, one of the world’s most comprehensive, is designed to help multinational companies and governments determine compensation allowances for their expatriate employees. The survey covers 209 cities across five continents and measures the comparative cost of more than 200 items in each location, including housing, transportation, food, clothing, household goods, and entertainment. Governments and Major companies use data from this survey to protect the purchasing power of their employees when transferred abroad and to assess local expatriate housing allowances. Istanbul is ranked 101th city in the cost of living survey(Mercer 2016), which means a low-cost urban life awaits you at the crossroads of Europe and Asia.

A city’s quality of living standards is certainly an important element for employers & employees to consider. Istanbul converts itself into a vibrant and limitless city with its countless opportunities and cultural background. The art and culture is so rich in the city that it offers amply choices for social activities.

Istanbul enjoys being among the safest cities in the World. The Safe Cities report released by the Economist Intelligence Unit, is based on an index composed of more than 40 quantitative and qualitative indicators. These indicators are split across four thematic categories: digital security; health security; infrastructure safety; and personal safety. Istanbul becomes world’s 41th safest city (The Economist-2015), surpassing Moscow, Johannesburg and Mumbai.

Another Index is released about Crime rates of the cities by Numbeo. Crime Index is an estimation of overall level of crime in a given city or a country. Numbeo, which is the world’s largest database of user contributed data about cities and countries worldwide, concludes that Istanbul with a ranking of 133th is among the safest global cities ahead of Rome, Washington, DC, Paris and Dublin in the classification of Crime Index. (Numbeo-Crime Index 2017)

Strategically located between key markets in Europe, the Middle East, Russia and Central Asia, the entrepreneurial ecosystem in the city is dynamic, high potential and fast growing , thanks to its young, educated, and risk taking workforce as well as amply incentive schemes.